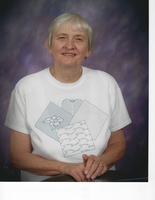 Caroline K. Moffitt age 87 of Honeoye Falls, NY died Wednesday, March 18, 2020 at the Episcopal Church Home in Rochester. She was born the daughter of the late Marvin and Elma Merkel Kimball on October 20, 1932 in Mendon, NY. She was a member of the Honeoye Falls First Presbyterian Church. Caroline was predeceased by her husband Robert, son Craig, sister Katie Richardson and brother Ivan Kimball. The family would like to thank the Episcopal Church Home for the love and care they extended Caroline and her family for the short period of time Caroline was a resident there. Caroline is survived by her daughter Debbie (Kate Auberger) Moffitt; sisters, Florence Parker, Cheryl Egdemir and Harriett Parmelee; brother-in-law Hank Moffitt, along with many nieces and nephews. No prior calling. Services will be announced at a later date and will be held in Honeoye Falls First Presbyterian Church when time allows. In lieu of flowers, memorials to the First Presbyterian Church of Honeoye Falls and or the Mendon Presbyterian Church.