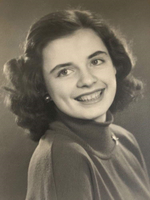 Rochester, NY: Jutta Elsa Buschang (Rockwell, Pianka), aged 86, passed away peacefully Friday, April 3rd, 2020 after a long battle with dementia in the Episcopal Church Home in Rochester, NY. She was a great lover of discovering the world through travel and hiking. Some of her favorite trips included seeing Fuiji, doing an African safari and hiking the Grand Canyon from rim to rim (over 20 miles!) at age 65. She was born on March 4, 1934 as the only child to Otto and Elsa Pianka of Berlin, Germany. In 1955 she moved to Rochester, New York because she greatly wanted to live in the United States. She met Joseph Rockwell shortly after, who was stationed in Berlin at the time. They were married in Germany in 1957 and welcomed two daughters into the world. She is survived by her ex-husband Joseph Rockwell, two daughters, Linda (Richard) and Sandra (Mauricio) and grandchildren Brian (Jessica), Maria (Evan), Kimberly and Nadia and three great grandchildren Charlotte, George and Vincent. She is predeceased by her husbands Heinz Buschang and Tom Eagling. She is remembered fondly by her many step-children, "bonus" children and grandchildren. Jutta will be remembered by her family and friends for being an incredibly fancy dresser, a wonderful mother, grandmother (Oma) and friend. A Service will be announced at a later date. To leave a condolence, please visit www.mertonkaysfuneralhomecom