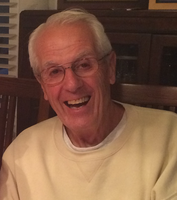 Walter Charles Pennington of Honeoye Falls (formerly of Lima, NY) Born July 6, 1934, in Rochester, Walt passed peacefully on November 19, 2022, at the Friendly Home of Rochester. Walt joins his beloved wife Ann who passed just one week earlier on November 12th. Affectionately known as "Joe" to the Pennington family and residents of Lima, he moved to Doran Rd when he was just 10 years old and resided there for almost 70 years. Walt leaves two daughters; Barb (Bob) Struble of Sun City Center, FL, and Sue (John) Lanphere of Honeoye Falls; two grandsons AJ (Rachel) Laveer and Cameron Lanphere; his sister-in-law Muffy Meisenzahl and brother- in-law George (Paula) Rowlinson; several cousins, nieces, and nephews. Walt and Ann met at SUNY Geneseo and started their teaching careers at Caledonia- Mumford Central School. He taught for 10 years until he became the elementary school principal for the next 32 years. Generations of Cal-Mum teachers, children, and families still remember his caring and kindness during their time in the elementary school. He was often seen having lunch in the cafeteria so he could get to know his students better. Walt was a devoted family man who loved nothing more than to do fun family activities together. He learned to love skiing at an early age on wooden skis at Highland Park in Rochester. As his kids grew, they learned to ski at Letchworth State Park on the rope tow and then spent many years together enjoying Bristol Mountain. He and Ann started the elementary ski club for Cal-Mum and were longtime members of Bristol Mountains' Old Fogies Club always developing friendships and spreading kindness. The family pool that he and Ann built was another source of hours of laughter and fun for both family and friends - the gate was always open! As a dad and grandpa, Walt was always gentle, kind, and caring. He loved making others smile and was up for just about anything. He was a jack of all trades which included mushroom farmer, mechanic, painter, plumber, home remodeler and more as he and Ann maintained their beloved property on Doran Rd for almost 55 years. Even throughout his long battle with dementia, he was always the kindest of gentlemen. Walt's family thanks the entire staff at The Friendly Home's memory care unit and Rochester Regional Hospice for their unending care, compassion, and kindness throughout his long struggle with Alzheimer's disease. A special thanks to Mark Stevens at Merton Kays Funeral home for his compassionate care of both Ann and Walt. Walt will be buried in a private service at the West Bloomfield Rural Cemetery next to Ann and his cherished mother and father, Walter and Jane Pennington. Memorial donations can be made to the Lima Ambulance Fund, PO Box 335, Lima, NY 14485.