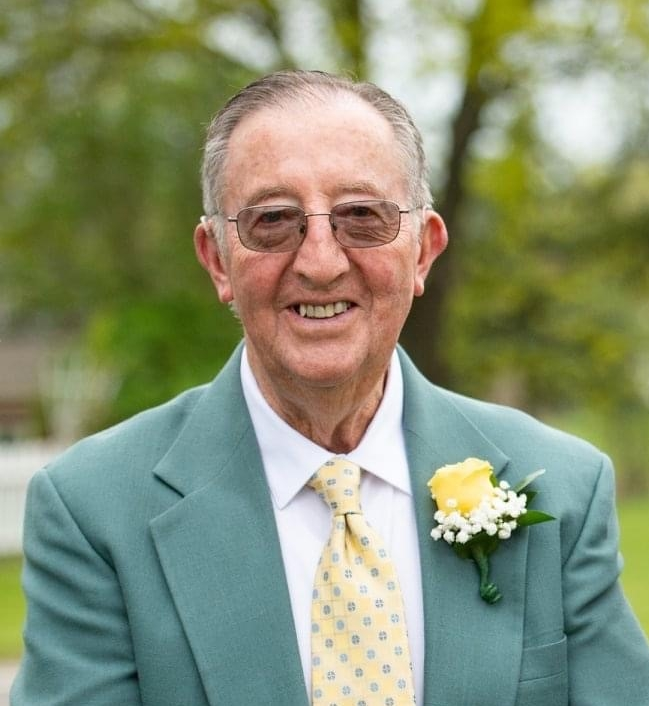 John R. "Jack" Gaffney passed away Wednesday March 2, 2022 with his family by his side, at the age of 88. Predeceased by his parents, Bart and Mary Rose Gaffney, Mother and Father-in-Law, Myron R & Ruth White. Brother William (Bette) Gaffney, sister Monica (Jim) Carey. Survived by beloved wife of 64 years, Carolyn (White) Gaffney. Also survived by children, Paula (Bill) Harvey, Martha (Allen)Mack, John (Cathy) Gaffney. Five Grandchildren, David (Cheryl) Mack, Sarah (Josh) Morse, Billy (Sarah) Harvey, Jimmy (Martha) Harvey, Mary Rose Gaffney. Eight Great Grandchildren, Sadie, Sam, Charlotte, Cameron, Aiden, Billdan, Kate & Jay. Brother Jim (Gloria) Gaffney, Brother-in-Law, Myron (Janet) White. Many nieces and nephews. Jack was blessed with great friends and loved by many. Jack was a graduate of Rush Henrietta Central School, a life long resident of Rush NY and member of St. Joseph Catholic Church in Rush where he regularly attended mass and for 20 years was a minister of communion and Eucharistic Adoration. After graduating High School, Jack put off his college education to take over the family dairy farm due to illness in the family. He enlarged the dairy and continued farming for 12 years. It was at this time that he gave up the small farm and started with the Transportation Department at Rush Henrietta Central School and remained till retirement. Jack became Director of Transportation in 1971 and remained in that position for 26 years. In that time he developed a passion for the students, his district, and his staff. His service to the district and the community was a source of great pride. Jack was a life member of the Rochester Area Transportation Supervisors Association and a member of the New York Association for Pupil Transportation, to which he was inducted into their Hall of Fame. In 1983, Jack was the first recipient of the prestigious Art Shock Award, given by the New York State Transportation Association, to a Director who demonstrated outstanding service and dedication to student transportation. It was his commitment, dedication, and forward thinking that earned him respect among his colleagues in transportation across New York State. Jack was a volunteer fireman for the Rush Fire Department and was currently a social member. He also served as Town Councilman on the Rush Town Board. No prior calling hours. Jack's funeral mass will be celebrated Thursday March 10th, at 10:30 am at St. Marianne Cope Parrish, St. Josephs Church, Rush NY. Burial in Pine Hill Cemetery, Rush NY. In lieu of flowers, donations may be made to, the Henrietta Ambulance (CHS), the Rush Fire Department Ambulance Fund, 1971 Rush-Mendon Road, Rush, NY 14543 or Rush Henrietta F.I.S.H./ RHFT, P.O. Box 302, Henrietta, NY 14467.

Share Your Memory of
John
Upload Your Memory View All Memories
Be the first to upload a memory!
Share A Memory